How to modify a Korg Monotron

So here's how to modify Korg's new Monotron analog ribbon synthesizer. Perhaps this is the first document of Monotron mods in Europe since it still hasn't been released here.

It's actually a very easy machine to modify because for whatever reason Korg decided to label all the interesting points on the bottom side of the PCB. This may well have been for testing units at the factory/service centers. Perhaps though it could have been that the designers anticipated this little machine would be hacked, much like the Gakken which pretty obviously inspired this piece. Incidentally in the magazine that comes with the Gakken there's a picture of them showing it to Korg, that was in 2008, go figure.

Modification wise everything is simple enough except for the gate. Unfortunately the gate point affects the pitch somewhat. There's a few solutions, the first of which is to use a single pitch cv line into the gate socket. This will work but you wont be able to get really low notes which is less than useful.

After a little research I came across an idea to use a dtc114 transistor to trigger the gate (soldered at a different point). I tried this but didn't have much success. Also that method will result in the LFO not re-triggering which is bad since the LFO is the closest thing to an envelope on the machine.

By far the simplest solution is to use something like Silent Way by Expert Sleepers (see my previous video on this software) or Volta by Motu. After calibration there's no issues whatsoever and the monotron tracks over 5 octaves nicely.

Using an adjustable dc power supply is a good alternative to the batteries and is also useful in getting the Monotron to a decent tuning range, just don't dial in more than 3 volts. I built my power supply based on this schematic

If you intend to use both battery power and dc power you should include some diodes in your design.

And lets not forget the filter, the side of the packaging says "the legendary MS-20 filter" while this is true design wise it would probably be more accurate to say the MS-10 filter since it's only low pass and the MS-20 has low and high pass filters. How does the filter sound? actually very good! I've repaired some MS units and the Monotron really does have some DNA from the MS series, even down to the small noise hiss when the resonance is high but not yet self oscillating.

A couple of things I noticed about the filter input, if you drive the input signal too hard the resonance almost disappears, so be sure not to overdrive it too much if you want the full character of the filter. Also the input jack is stereo which means if you use a Y cable you can run two signals into the filter comfortably. I tested to see if the left side input leaked to the right input and it doesn't at all, which means it really is a true stereo input to the filter which is very nice.

As for the output, even though it's a mono output via a stereo jack the manual states that you shouldn't use a mono jack on the stereo output, so it's probably best to use a stereo jack plug but leaving the ring floating to get a mono signal into your daw/mixer. The output is a little noisy due to the fact that its really a headphone out and the output level is a little low so you will probably want to use a noise gate to remove the noise floor when it's not playing. (this is the same with the Gakken)

That's about it, here's the diagrams for modding, as you can see it's very simple indeed and should be no problem for anyone with soldering skills.

The Monotron should be available to buy in Europe from around the 30th of June for around 50-60 euros. 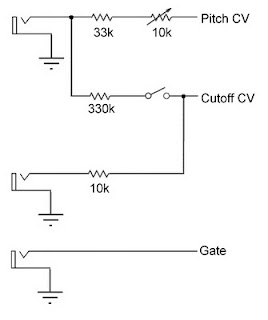 
Here's what's got to be one of the best bargain analog synthesizers out there. It's the Gakken SX-150, a stylophone styled analog that can be found on ebay for $40. The machine has to be assembled, but there's no soldering involved. It's just a matter of putting the PCB in the case and connecting the power line, pretty simple stuff really. It's very much a gimmick but since it really is a true analog it's fairly easy to modify it into something useful.

So here's what I added, for reference I'm looking at the board with the PCB text that reads "hechenggi" in the bottom left.

This one is really simple since the cv is tied to the gate, so you only need to wire in a jack and wire the tip to the south side of R7 and the sleeve to ground.

Again very simple, you can tap the LFO outputs from the waveform selection switch, to add an LFO input you need to cut the trace between the waveform switch and the south side of R17. You can then add a toggle switch between these points and wire a jack to one side. You will have to add a resistor to ground for the floating side since as soon as the trace is open the tuning changes. With clever use of a two way toggle you can make it so that the internal LFO is disabled when the switch is up and the resistor is tied to ground only when the internal LFO is off.

I did this purely for stability, since sometimes the pitch env is still active a little even when the knob was fully off. You need to cut the trace between the south side of R13 and the north pin of the pitch env pot. You can then wire your toggle between these points. Again you'll need a resistor to ground to keep the tuning correct when the pitch env is disabled. Make sure that the resistor to ground isn't connected when the Pitch Env is enabled or you'll loose most of the range on the Pitch Env pot. Exact resistor sizes for this mod and the previous one will vary depending on your power supply settings and control voltage so it's probably best to get a guitar tuner or something similar and try what sizes work best.

Fairly simple, wire a 10k pot (as a variable resistor) to either side of R39. If you want to place the pot where I placed mine you will have to remove the power jack and move a capacitor. I extended the legs of the cap as you can see in the following pictures. 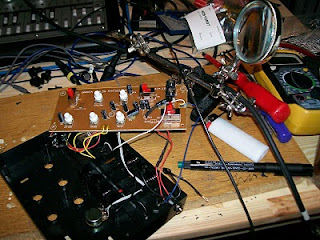 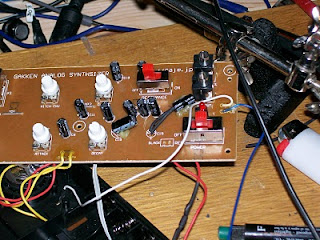 I placed a resistor between the north and west pins of the cutoff pot since as stock the cutoff knob only worked for the last 30% of travel. The resistor helped to fix this, again you'll have to experiment with sizes here (if you need to do this). Start with a large resistor and work down until you find a suitable size.

You can find details on how to make one here, I just made two in one. I would recommend using precision trim pots so you can fine tune the voltage (don't go over 6v though)

Here's the schematic which is a little simplified but could be useful. 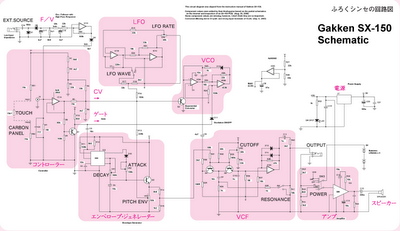 Just thought I'd show you the new version of my DIY sequencer. In the last video I had it mounted in the modular on an old CD cover. This was taking up about 24HP so i decided to shrink it down to 16HP. I had to use two doepfer 8HP blind panels since unfortunately they don't sell 16HP ones.

I put the LED's into a nice new arrangement and added last step switches inpsired by the video response to the last video by Synthetik. I didn't have double throw switches, so I had to use single throw. So at the moment it doesn't work without the pitch knobs being at maximum. I'll add some double throw in the future to fix that and add the ability to remove the step from the sequence. I'll also add a clock trigger circuit so that I can drive it from the modular clock.

Of course I'll post a video with schematics for that once it's done, which will probably be the last work I do on this particular project.

All in all I think it looks a lot better now and is much more sturdy compared to the original CD case panel.
Posted by DinSync at 4:51 AM 8 comments: